Dogs Who Ruined the Holidays: A Cautionary Tale For Humans With Dogs 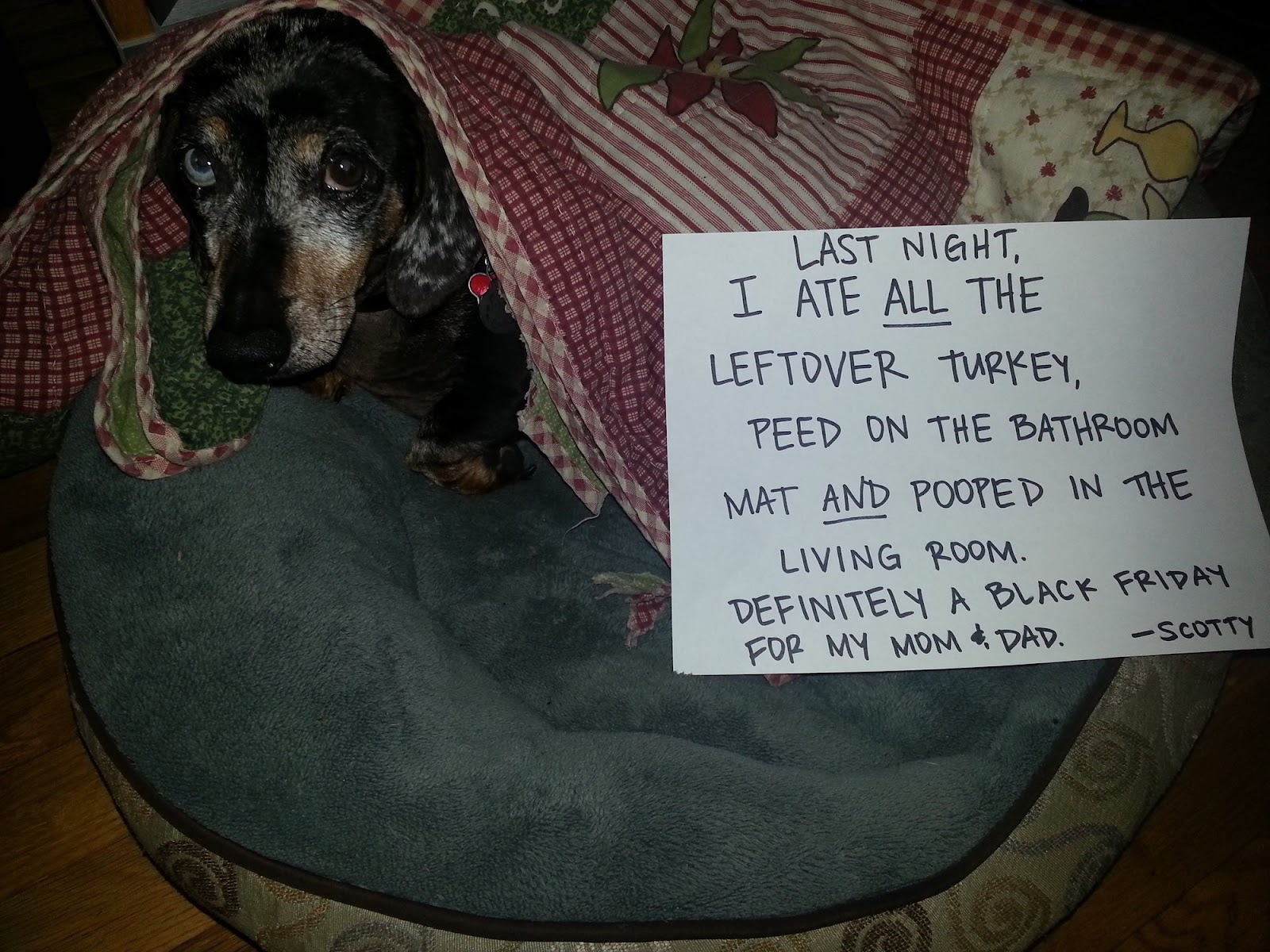 OK, maybe dogs ruining holidays isn’t the right way to look at it… More like dogs doing their best to be a part of the holiday festivities? Either way, this posse of naughty dogs had no intention of settling for post-dinner scraps.

DISCLAIMER: These are true stories, but the names have been changed to protect the identities of the guilty parties.

Having Her Cake & Eating It Too

Because sometimes, we take liberties with the 5-second rule...

Meet Layla. Visiting her human mother-in-law (HMIL) for Christmas Eve dinner was a great adventure, but watching the humans sit around eating cheese without any regard to her desire to partake was the worst.

When the humans heard the deeply disturbing and super-gross guttural lapping noise coming from the kitchen, they discovered Layla, neck-deep in her HMIL’s trifle cake. And yes, it may have been a bit more than 5 seconds, but the humans served that cake to their guests later that night anyway, making it a win for everyone, right?

Because dogs get “hangry” too...

It was the eve of the BIG holiday party right before Christmas and the delicious smells were driving Rosie the Golden Retriever absolutely insane. Her favorite humans had been working for days and had assembled over 100 tasty appetizers for this annual gathering.

Paws up, mouth open, insert food (toothpicks and all), swallow without bothering to chew and voila! Every single appetizer was now on the inside of Rosie’s distended doggy belly. Needless to say, there was a massive shortage of appetizers that night and Rosie was sick as a dog for the next few days. Nobody knows if the toothpicks were worse going in or coming out, but Rosie regrets nothing.

“I’m So Here For This Turkey”

Because resistance is futile, hoo-man...

It didn’t take long for the humans to notice that something wasn’t quite right. The table, adorned with mountains of holiday favorites, had one large, empty platter, void of its original contents...

Enter Rosie, dodging delightfully through the sea of humans with a 15-pound turkey proudly in her mouth. The humans were gracious but from that day on, Rosie was banned from food-filled events.

Because “treat yourself” is a universal occasion…

Rum cake weighs a lot and 5 pounds of glazed sugary bliss on the inside of a dog’s body is NOT OK, but Luna wasn’t thinking about her health. She saw an opportunity to treat herself and took it without thinking twice, and the next time her human saw evidence of the missing cake… let’s just say that the 5 pounds that went in were nothing like the 5 pounds that came out, and it was a long night for everyone.

A Dog On The Table

Because that’s where humans keep the good stuff…

And then there was Pepper. A small terrier mix who enjoys long walks in the park, belly rubs, and her steak medium-rare.

One human screamed, “OH MY GOD, YOUR DOG IS ON THE TABLE!”

And the other human screamed, “PEPPER, NOOOOOOOOOOOO!”

And just like that, the $80 hunk of grass-fed Christmas filet mignon was deemed inedible, covered in dog slobber, and crusted with debris from the hardwood floor. Pepper was scolded and sent to bed without supper

Another Dog On The Table

Because I do what I want, Karen…

The table was set and a mouthwatering spread of Thanksgiving delicacies laid out for a very large group of turkey-loving humans. The Cocker Spaniel called Hank had been pacing the kitchen perimeter for hours, waiting patiently for scraps that never came.

To the horror of the humans, Hank was found at approximately 5:42 PM atop the dining room table, gorging himself on the bowl of mashed potatoes, but only after having decimated the ham and destroyed the platter of stuffing, along with a healthy handful of deviled eggs and sweet potato casserole.

Hank was sick, but he didn’t care because he does what he wants. The humans suffered a long night of Hank’s gastric distress but loved him nonetheless.

For Dogs Who Ruin The Holidays

Dogs who overindulge during the holidays need a little help from their humans. Stock your pantry with our convenient Freeze-dried bland diets with easy to digest ingredients to calm your dog’s digestion.

And don’t be so judgy, Karen - Hank couldn’t resist!